The need for greater integration, dialogue and interdiscipline was one of the great conclusions of this second meeting, which seeks to strengthen Franco-Chilean scientific relations. 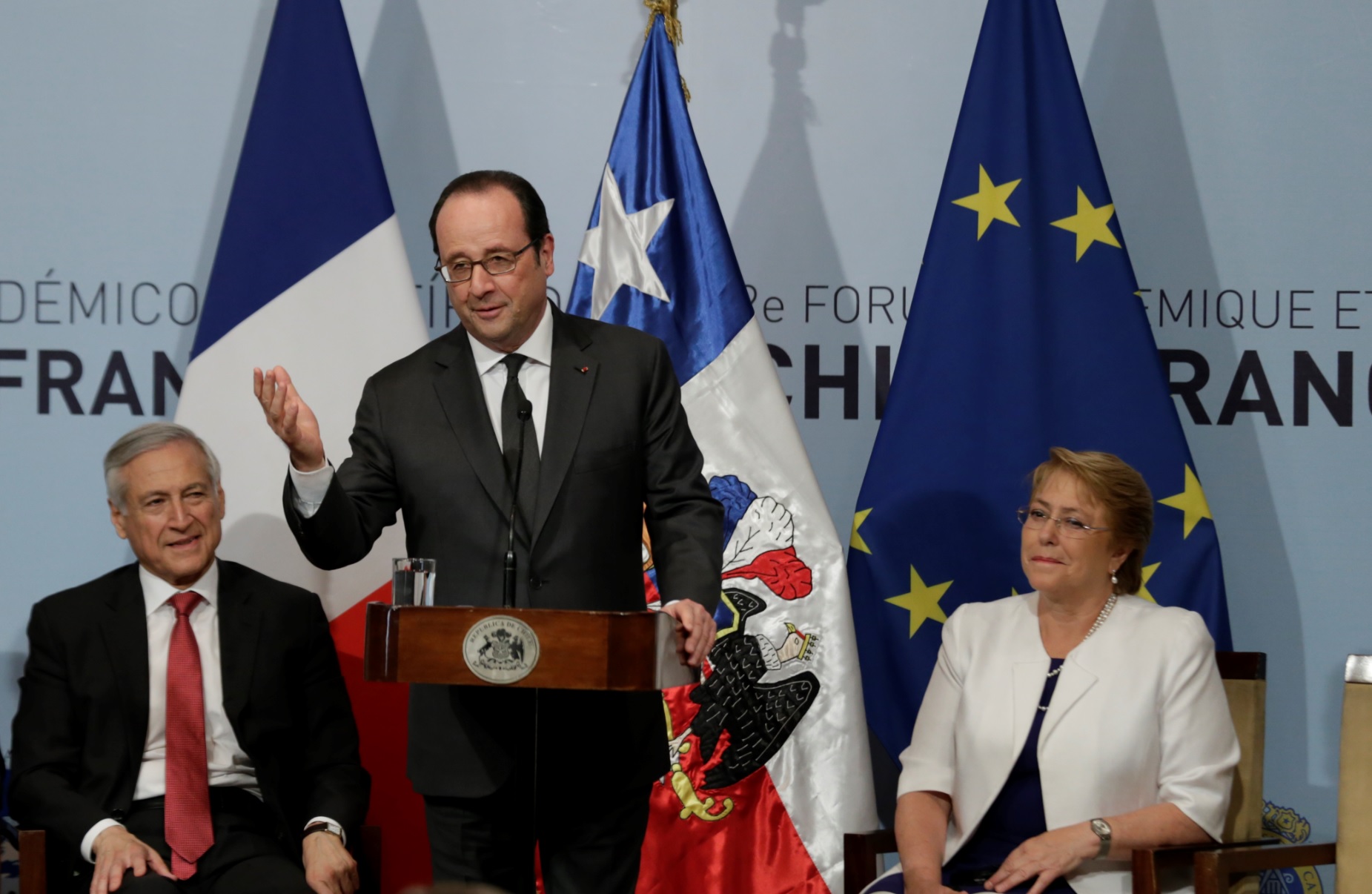 The 2nd Chile-France Scientific Academic Forum was held at the Ministry of Foreign Affairs, with a large gathering of scientists and the presence of Chilean President, Michelle Bachelet and the French President, François Hollande,

The event, in which UC was one of the organizers, with the University of Chile, the Ministry of Foreign Affairs, the French Embassy and Conicyt, aimed to promote dialogue and reflection to encourage the creation of new projects to increase the student mobility, cooperation between research teams, and rapprochement between the worlds of research, education and business. Guidelines aimed at strengthening bilateral cooperation between Chile and France.

On this occasion, the discussion was channeled through 5 thematic tables, where the topics addressed were renewable energy, coastal sciences, sustainable water management, inequalities and health sciences.

At the opening, President Michelle Bachelet pointed out that this forum seeks to “continue to consolidate our bilateral relationship in key areas for our common horizon.” Along the same lines, the President assured that “the role of academia and science is to dialogue looking at our societies, bringing the light of knowledge to their problems and concerns. And for this, international cooperation, and in particular a growing joint investigation, can be of great help”, she stressed.

For his part, Foreign Minister Heraldo Muñoz stressed that “this bilateral cooperation initiative is consistent with our conviction that the future development of Chile depends more and more on our ability to produce and assimilate cutting-edge science and technology, which is mainly generated today in the globalized world and in friendly countries like France”.

Conclusions of the meeting

Among the ideas most revealed by scientists, the concept of interdiscipline was the common factor in the different dialogues. In this sense,  the need to promote scientific interaction between both countries and generate the instruments that allow such integration was highlighted.

Thus, for example, in the area of ​​”Coastal Sciences”, the specialists agreed that this is a very complex area, where there is a lot of interaction that calls for interdiscipline. Therefore, it is necessary to interact between collaborative and individual initiatives, as well as the need for co-financing instances, which is why the organization of a workshop for this 2017 was proposed, and thus address cross-cutting issues, as well as generate more visibility.

For their part, in “Health Sciences”, they estimated that there is currently little interdisciplinary work in the area and hardly visible in both countries. For this, the generation of networks is positioned as a fundamental axis of interaction. Likewise, financing for the development of innovation.

Another of the central themes was “Inequalities”, where the scientists’ proposal focused on holding workshops during the year to define priority areas, with professionals from France and other regions of Chile; improve the dissemination of cooperation tools; promote interdisciplinary work; and promote participation in the management of public issues.

Regarding “Energy” issues, some of the approaches were to promote biomass from a view of the southern cone, with Chile as a relevant actor, as well as the need to consider the social variables that energy development implies, where the form of development goes far beyond the technical. On the other hand, the scientists emphasized the need for Chile to promote its presence in the European Union.

They also agreed that improving the sustainability of water resources is common to both countries, which is why it is essential to achieve a harmonious development of society. In this sense, the scientists also highlighted Chile’s geographical characteristics, which make it a true natural laboratory.

After concluding the meeting, the UC Vice-President for Research Affairs, Sol Serrano commented that “this forum will give rise to collaborative projects and links between academics and strategic partners from both countries that will result in progress and quality of research, also enhancing the strategy of the universities to link with the best universities in the world”, she indicated.

Among the bilateral ties of both countries, more than 50 years of scientific collaboration stand out, which has increased in recent years and where in 2015, for example, the thematic bases of this meeting emerged, when Presidents Bachelet and Hollande agreed on areas of common interest, including energy, marine biology, earth science and astronomy.

Likewise, it was that year that the First Chile-France Scientific Academic Forum was held in Paris and that laid the foundations for this second meeting.

According to the French Institute, some of the figures that reflect the Franco-Chilean relationship, stand out for example 1000 co-publications per year; 806 Chilean students enrolled in 2015 in French higher education institutions, of which 287 are PhD; 56 ongoing projects; and 450 Chilean students per year staying for a minimum of 3 months in France.

“The bilateral Chile – France relationship has always been characterized by being on excellent terms and by an active exchange and cooperation in various fields, among which the links in education, science and technology, culture, among others, stand out,” said Sol Serrano.