In the framework of the 5th International Congress on Educational Innovation at the Tecnológico de Monterrey, Presidents of the UniAndes, TEC and UC met to advance the common work agenda of the Triada. Also participating in the meeting were the Presidents of the Universities of Austin in Texas, and Deusto and Mondragón in Spain. Also, a delegation represented the UC on teaching innovation issues. 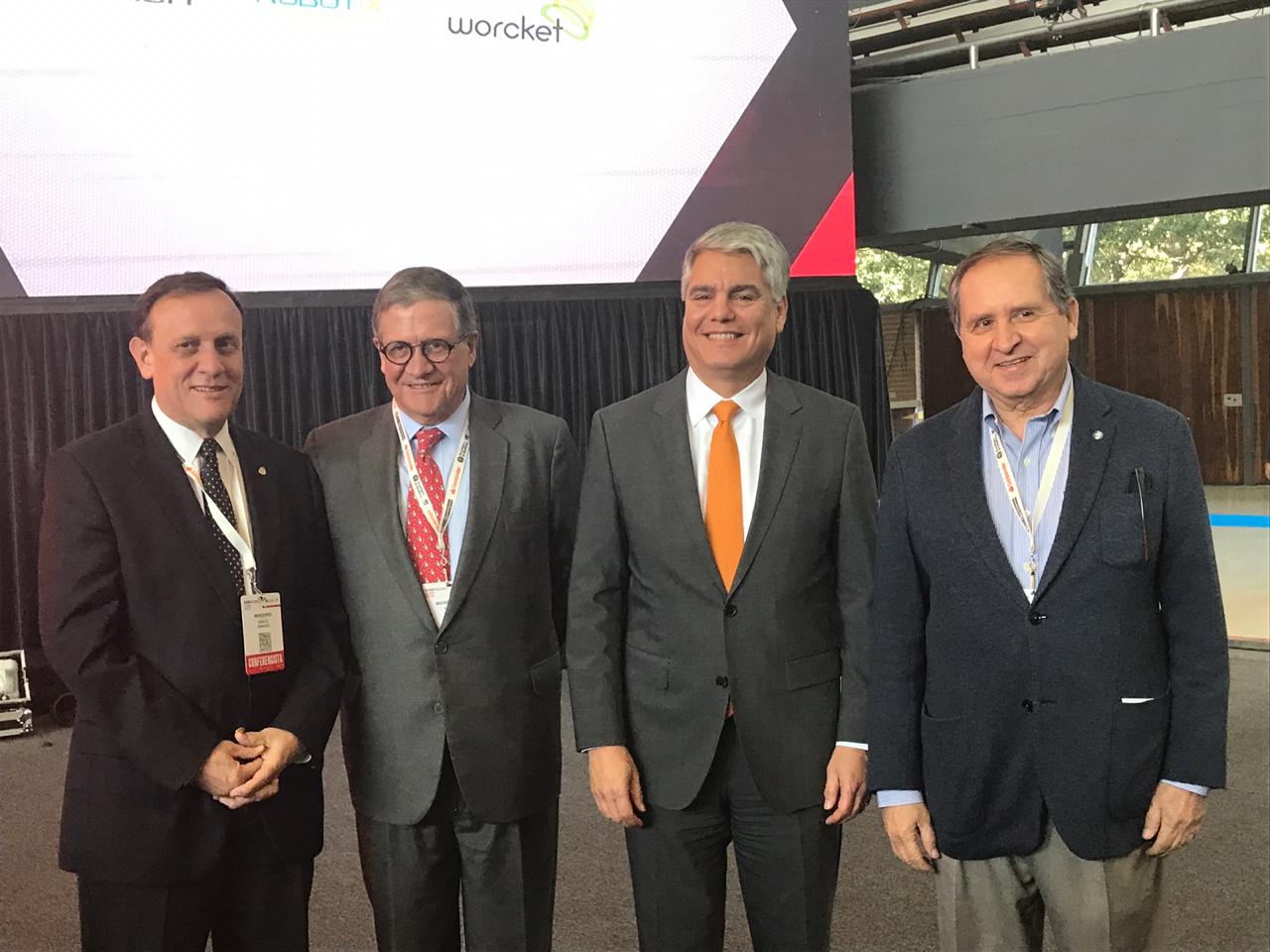 The Triada. That is the name of the alliance made up of three leading universities in Latin America: Tecnológico de Monterrey (TEC), Universidad de los Andes de Colombia (UniAndes) and Pontificia Universidad Católica de Chile (UC). Strengthening this link and addressing future challenges to contribute to the development of the region, were the objectives that brought together its authorities in the framework of the 5th International Congress on Educational Innovation.

The President of UniAndes, Pablo Navas; the President of the TEC, Salvador Alva; and the President of UC, Ignacio Sánchez, led a working meeting in which the representatives of the Tríada participated, in which the progress made since its presentation on 15 February was evaluated. August in Cartagena, Colombia. Among the most prominent are: Coursera for partners, a distance education program that is operating with MOOCS (Massive Online Open Courses) in common and with free access for students, professors and officials of the three universities; the innovation in education contest in the Triada, soon to be presented, whose objective is to share good practices in educational innovation; collaborative work in the area of ​​Sciences and Humanities that is located within the faculties, where the initiatives in Medicine, Administration, Social Sciences and History and Political Science stand out; greater student exchange and the development of sustainability issues, in relation to the International Center for Sustainable Development that is part of a large project coordinated by UniAndes.

As President Ignacio Sánchez stated: “I would love for UC’s 200 years, one of the university’s strengths is the Tríada. We are in many networks and will follow us in them. However, this alliance goes further in depth and the topics to be worked on are common to the three institutions. It is a strength that in our universities and societies we have many common realities ”.

On the occasion, an agreement was signed that establishes the commitment of the three institutions to work together to expand their strength and impact in the region. The need for universities to play a more decisive role in the formation of leaderships, and in the design and implementation of public policies that contribute to the equitable and sustainable development of communities, was established. Thus, the Triada seeks to generate synergies through research that have an impact on society, hence the areas of collaboration include topics such as democracy, government, corruption, migration, Latin American culture, sustainability, academic exchange, Latin American studies, research in the territory, among others.

“I think it is very important to have a more relevant role in the creation of knowledge in Latin America, to address problems that affect us as a region. It is about crossing borders and working collaboratively, generating cutting-edge research in our continent”, stated the Director of Research Affairs Office, María Elena Boisier.

During the first day, the rectors visited the Monterrey Campus of the TEC and participated in a meeting with the media. They also joined the activities of the congress by attending the opening ceremony in which the President of Tecnológico de Monterrey, Salvador Alva, gave the conference entitled “Vision 2030”. It was then followed by the keynote address “Universities as an Engine for Upward Mobility” delivered by the President of the University of Texas at Austin, Gregory L. Fenves. The attendees were also present at the keynote conferences “Transformation in the Teaching of Sciences” given by the Nobel Prize in Physics, Carl Wieman and “TEC21 Educational Model”, presented by David Garza, PResidentof the Tecnológico de Monterrey.

On the following day, the Presidents participated in the panel “The Triada: Transforming the future of Latin America”, moderated by the Vice-President of Relations and Development of the Tecnológico de Monterrey, Juan Pablo Urra. In the session, the reasons for starting this alliance, the initiatives carried out, and especially the projects to be carried out were presented. UC President, Ignacio Sánchez emphasized “the great potential of this academic alliance, which is framed in promoting a look at Latin America, highlighting the values ​​of our culture and identity, within the framework of an internationalization process in which our universities are immersed. The growth and depth of projects in common between these three universities of marked public commitment, has managed to develop an academic community of which we are seeing only the beginning of a great potential for growth and scientific, cultural and social contribution to our region”.

More than 3,500 people from 700 institutions and more than 24 countries participated in the International Congress of Educational Innovation of the Tecnológico de Monterrey. This meeting, which has been held since 2006, has become a highly relevant space in which innovative trends and practices in education are made known. Professors, managers, entrepreneurs and experts of great international level participate, and share their experiences and proposals for innovation and development with the attendees.

On this occasion, it was held at the Monterrey Campus, which was attended by a UC delegation led by President Ignacio Sánchez and made up of the director of Research Affairs Office, María Elena Boisier, UC coordinator of the activities of the Triada; the Deputy Director of the Center for Teacher Development (CDDoc), Chantal Jouannet; José Tomás Montalva, head of the teaching innovation area and Soledad González, head of the training area, both from the CDDoc; and Sabrina Seltzer, head of EduLab, from the Directorate for Transfer and Development Office.

The representatives of the CDDoc and EduLab presented outstanding works on teaching innovation, in work sessions that generated great interest and support for the work conducted in the teaching development areas of our university.