David Carroll, Valentine Goddard and Eduardo Sáenz de Cabezón were the three outstanding invited experts from the Future Congress, who gave open talks at the University, with great public attendance.

“Artificial Intelligence: Data, Ethics and Privacy” was the first “must-see” of the Future Congress at UC, given by David Carroll, promoter of the lawsuit against Cambridge Analytica about violation of privacy to social network users, which inspired the documentary ” The Great Hack “(Netflix).

Carroll emphasized the interest of Chileans in discussing issues such as legislation and the use of data, referred to some topics addressed in the documentary, the legislative delay in this framework and urged to continue making progress about future issues, such as neuro-rights.

“With a close referendum, this is a precious time for Chileans to discuss the issue of control over their data for the future,” he said. 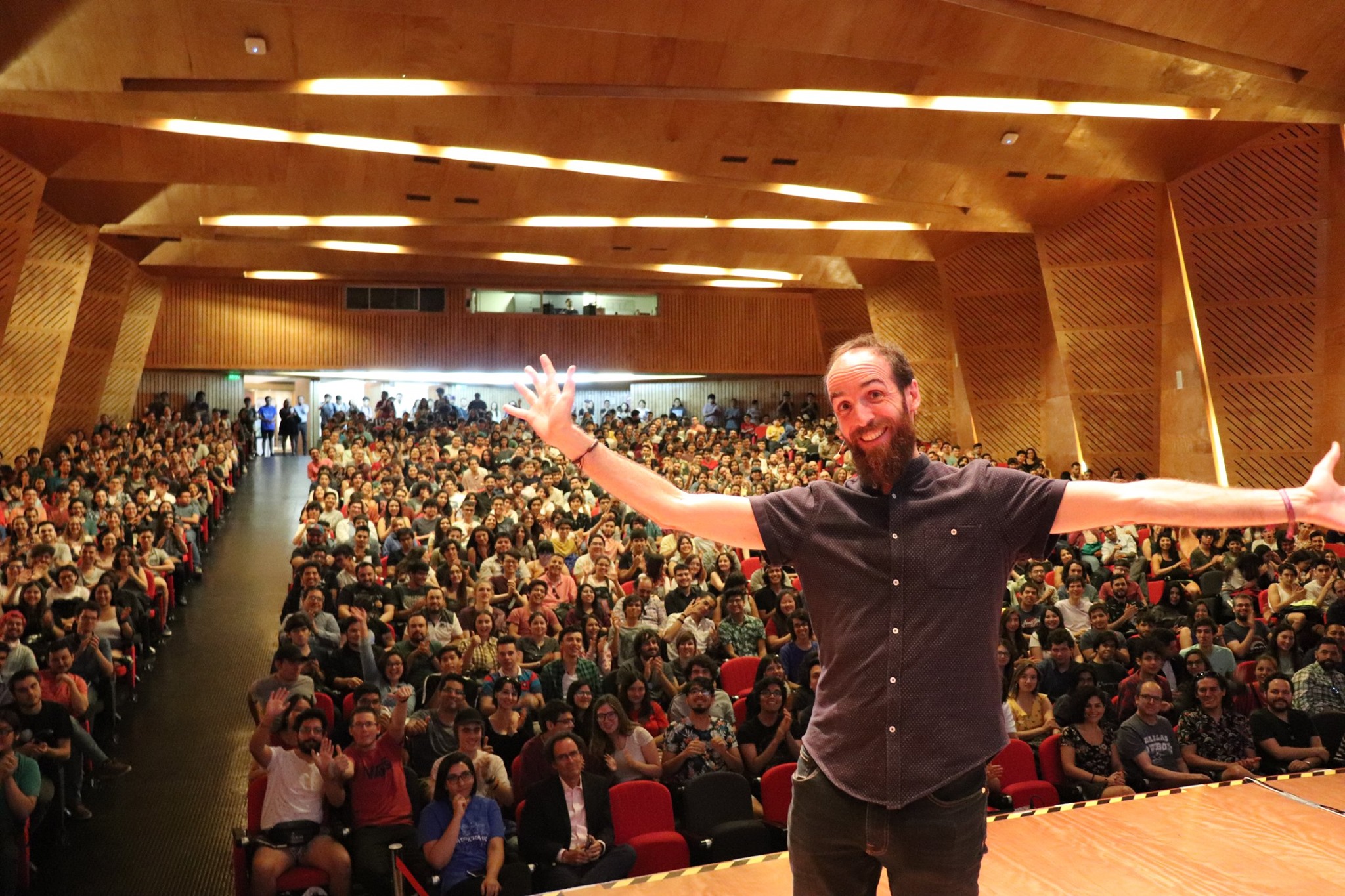 The activity, organized by the Faculty of Communications, the Faculty of Engineering and the Faculty of Mathematics UC, took place at the UC Headquarters and was completely broadcast on YouTube. The video is available HERE.

The second “must-see” of the Future Congress at UC, was Eduardo Sáenz de Cabezón, a mathematician and renowned popularizer of science worldwide, whose keynote address brought together more than a thousand people at the San Joaquín Campus.

Sáenz de Cabezón is the best-known Spanish-language disseminator of mathematics in the world, through stand-up comedy, conferences, shows, talks and workshops. Founder of “Big Van Ciencia”, successful mathematics youtuber, co-author of “Gardner for amateurs” and author of the book “Mathematical intelligence”.

People of all ages filled the auditorium of the Andrónico Luksic Complex to listen to his talk “The mirage of the majority”. Broadly speaking, through a pleasant story, the communicator gave examples of situations in everyday life, such as interactions in a city, passes in a soccer game or the supremacy of certain opinions, which can be interpreted or reflected through Graphic Schema Theory.

Subsequently, photographs were taken with hundreds of those present and autographed the books of nearly 200 attendees at the event, organized by the UC Faculty of Engineering and the UC Faculty of Mathematics.

The talk was broadcast live and is available HERE

The third activity was the seminar “The impact of AI on society”, chaired by Valentine Goddard, lawyer, founder and director of “AI Impact Alliance” and world-renowned expert on the ethical and social implications of artificial intelligence.

The meeting took place at UC Law School and featured, on the panel, the academics Mauricio Correa of ​​the UC School of Philosophy, and Matías Aránguiz, coordinator of the UC Law, Science and Technology Program.

The Canadian expert referred to the potential that Artificial Intelligence could represent for the development of countries, the respective risks in the face of unethical management of these technologies and the concentration of production on AI.

In this regard, the expert stated that 40.5% is produced by the US and Great Britain and that, of this production, 32.1% is created by public-private organizations and 22.6% by the private sector.

“It does not matter who governs and creates artificial intelligence. There must be a link with civil society,” she noted, referring to the potential of AI to increase social inequities in the absence of parallel growth with informed dialogue.

“Artificial Intelligence represents a historic opportunity that can boost global GDP by $15.7 trillion in 2030, and that can have a major impact on education, health and employment,” he said, adding that the responsible use of AI implies socializing the benefits and democratizing access.

The seminar was organized by the Faculty of Communications, the Faculty of Law, the UC Faculty of Mathematics  and the Center for the Discovery of Structures in Complex Data, MiDaS Millennium Nucleus.