More than 360 articles in international journals and 180 young researchers trained, this international laboratory – made up of researchers from Spain, Brazil and Chile – for the study of climate change, commemorated its first decade of life, with the launch of a book and an exposition. 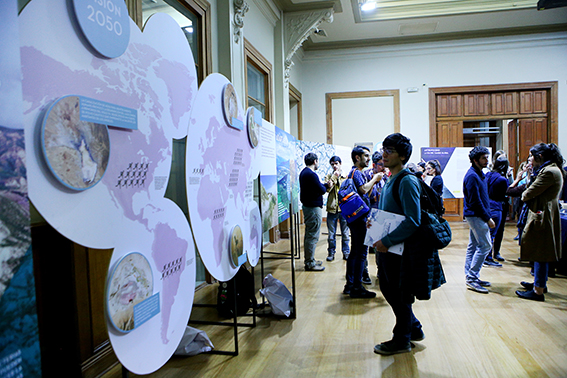 This year, Chile will host the most important global meeting on climate change: the Conference of the Parties, COP 25. Although Chile is responsible for only 0.25% of global emissions, our country is very vulnerable to this phenomenon.

More than a decade ago, Universidad Católica began a pioneering project to learn and generate new knowledge on this topic. In 2006, an alliance was started with the Spanish Higher Council for Scientific Research (CSIC, in Spanish) to work together on projects regarding global change and biodiversity. The work was so fruitful that in 2008 an unprecedented initiative began: an international research center on global change, with an Ibero-American character. Thus, the International Laboratory for R&D in Global Change was born (LINCGlobal).

The laboratory was formed in its beginnings by 25 researchers, both from Spain and Chile, thanks to the impulse – by the UC – of the Department of Ecology, especially Professor Juan Carlos Castilla, winner of the National Science Award. This tremendously fruitful collaboration allowed the construction of a new infrastructure at the Las Cruces Coastal Marine Research Station (ECIM, in Spanish), more than 360 articles in international journals and the training of more than 180 young researchers. In addition to adding the Federal University of Rio de Janeiro as an associated entity, moving towards the vision of making LINCGlobal an institution that generates knowledge from and for Ibero-America.

The Vice-President for Research Affairs, Pedro Bouchon, congratulated the researchers who, “with their vision, passion, effort and perseverance, have not only contributed to the generation of knowledge, but have also created a unique research model, based on the culture of collaboration and respect to contribute to a better understanding of the phenomena that affect us all, with a greater impact on public policies that collaborate with the mitigation and adaptation to global change ”, he said in a ceremony held in the Hall of Honor of the UC, occasion in which a book was presented that collects the research carried out by LINCGlobal and an exhibition on the Anthropocene.

The book “Global Change, a look from Ibero-America”, published by the Ibero-American Scientific Cultural Association (ACCI, in Spanish), LinCGlobal, the Spanish Higher Council for Scientific Research (CSIC, in Spanish), the Federal University of Rio de Janeiro and the Pontificia Universidad Católica de Chile is the faithful reflection of the contribution of a decade of the International Laboratory on Global Change. This issue compiles the main LINCGlobal research over 14 chapters, in a language and format aimed at the general public.

On behalf of the Executive Secretary of ECLAC, Alicia Bárcena, the director of the Division of Sustainable Development and Human Settlements of the Regional Commission, Joseluis Samaniego, was in charge of presenting this work. He emphasized the current global context characterized by climate change under different premises: “multilateralism in crisis, migration, demographic changes, the technological revolution and geopolitical changes. These points are an imperative to move towards a new style of development, more sustainable and that puts equality at the center ”, he stated.

Likewise, the academic of Biological Sciences and Scientific Director of LINCGlobal, Aurora Gaxiola, emphasized the importance of “joint research on climate change that has been developed in this first decade of life, especially in marine ecosystems and that is of great relevance to keep working”.

The comments were made by Cecilia Hidalgo, president of the Chilean Academy of Sciences, who called on the audience to reflect on the dimension of the problem that global change represents.

It should be noted that the book had the editorial participation of academics Pablo Marquet, Fernando Valladares, Sandra Magro, Alex Enrich-Prast, and Aurora Gaxiola.

What is the Anthropocene and what are its challenges? This is the question answered by Biological Sciences academic, Claudio Latorre, in the presentation of the exhibition “Anthropocene: the era of global change.” In the last 10,000 years, and particularly since the mid-20th century, the transformations caused by human activity have been of unprecedented magnitude. So much so, that homo sapiens has become by itself the main transformative geophysical force of global reach.

“This planetary novelty has given rise to what we call the Anthropocene, a geological period characterized by the domination of the Earth by our species,” said Professor Latorre. This is one of the ideas that the Book Global Change collects, and that is reflected in the Anthropocene exhibition. Among them, Fernando Valladares and the academic Claudio Latorre, appear as editors of the work.

Within the framework of the upcoming United Nations Conference of the Parties (COP25), UC formed a commission made up of academics and professionals from different faculties and centers of the university. Its objective is to bring together the different research and initiatives that are conducted around Climate Change, such as LINCGlobal.

Check  out the digital version of the book at the following link (http://www.lincg.uc-csic.es/wp-content/uploads/2012/12/LINCGlobal-2018-Cambio-Global-en-Iberoamerica-Baja-resolucion.pdf)