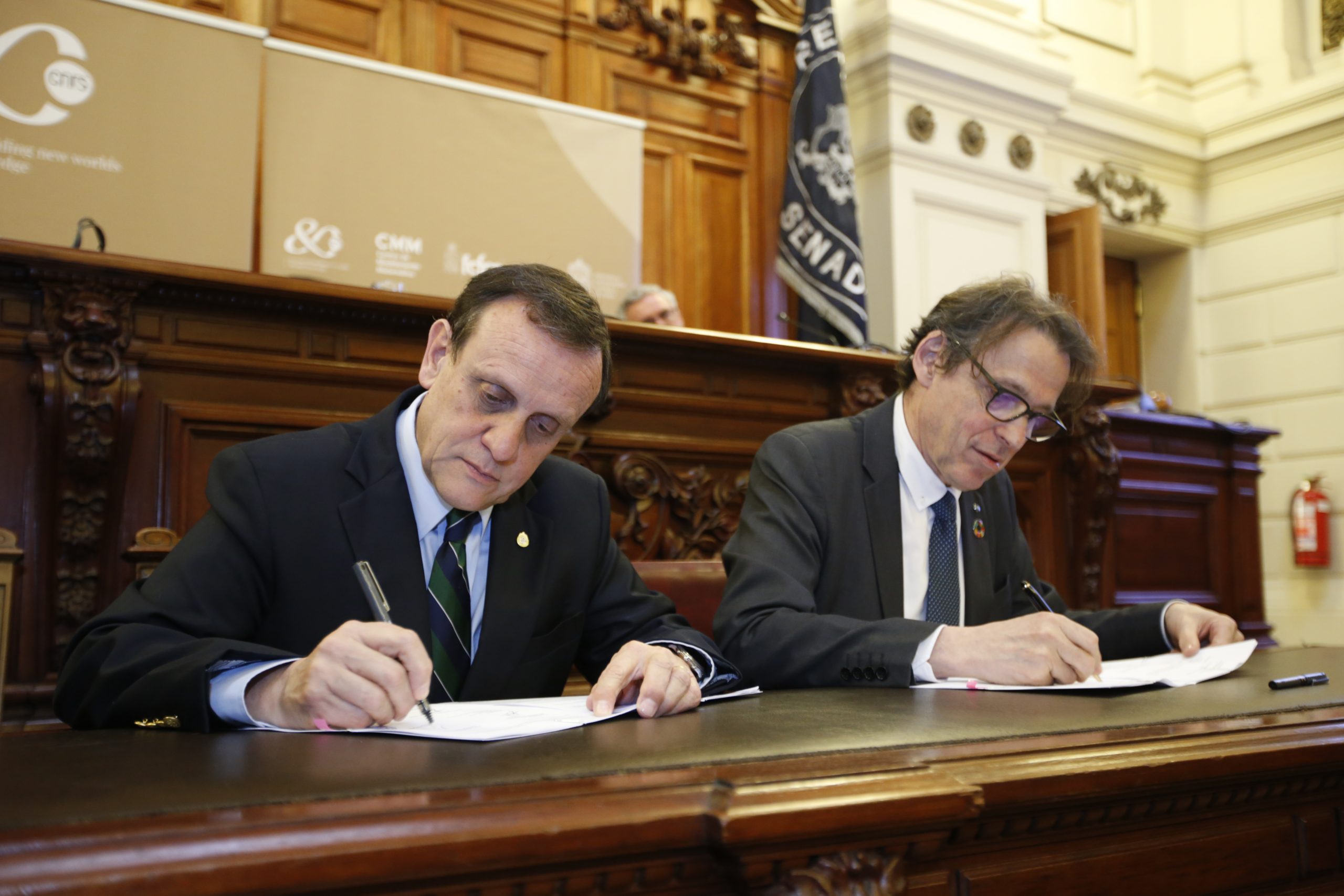 The CNRS is one of the world’s leading research institutions. Created in 1939, it has 33 thousand collaborators, in more than 1000 research laboratories in France and the world. These laboratories are shared with universities or other institutions dedicated to scientific research in any of the disciplinary areas. Together, they house more than 60,000 researchers, gathered around common research themes and the interest of working together in the long term. After the creation in Chile of the first international CNRS laboratory, our country became a key ally for the internationalization process of the French center.

Today there are ten international laboratories in Chile, three of which correspond to the International Mixed Unit (UMI), which represents the highest level of integration and institutional linkage: the Mathematical Modeling Center, the Franco-Chilean Astronomy Laboratory, and UMI Evolutionary Biology and Ecology of Alage. The other disciplinary areas of collaboration include mining, archeology, seismology, virology, oceanography, marine biotechnology, materials science, and a long-term observatory of human-environment interaction in Patagonia. The result from these connections is that the CNRS is the first institution in the world with which Chilean researchers publish their results.

“The 80 years of the CNRS is a milestone for the world of science. Signing these agreements for our university is a great honor and responsibility since France has been a persistent collaborator during all these years”, stated UC President, Ignacio Sánchez, during the ceremony in which the agreements renewal between Pontificia Universidad Católica de Chile and CNRS: Evolutionary Biology and Ecology of Algae (EBEA), the Franco-Chilean Astronomy Laboratory (LFCA) and the International Associated Hanta-Virus Laboratory (ANDES).”

“The greatest impact of these agreements is the continuity of the research, which is possible thanks to a positive work evaluation that has been developed jointly between researchers from both countries. In this way, the renewal of these agreements allows us to continue expanding and deepening the collaboration with France in the fields of astronomy, immunology and marine ecosystems, offering in turn the possibility of exploring new project initiatives and academic exchanges”, commented the Vice-President for Research Affairs, Pedro Bouchon.

Likewise, the UC Patagonia Interdisciplinary Research Station is the first Latin American observatory of the Middle Man network, dependent on the CNRS and made up of 12 research centers in different parts of the world, for the study of climate change. This initiative allows sharing experiences and data between the different stations, generating exchange of academics, students and young researchers; generating and strengthening international links, and support to conduct interdisciplinary projects.

“Integration in matters of international cooperation is the fruit of more than 20 years of collaboration in our country in the field of marine biology, especially marine biodiversity and the ecological mechanisms that generate it”, added the Dean of Biological Sciences, Juan Correa.

After the ceremony, a public conference was held to emphasize the results of the collaboration between Latin America and France on key topics such as mathematics, seismology, climate change, and astronomy.

To commemorate the CNRS 80 years of life and its collaboration with Chile, the conference “South America: A history of scientific integration to address the challenges of the future” was held on May 8th, 9th and 10th, where national and international exhibitors showed the advances and challenges in key topics for society such as climate and biodiversity, astronomy and data science. The event was organized by the UC academic of Biological Sciences, Sylvain Faugeron, along with Alejandro Maass from the Center for Mathematical Modeling (CMM), and the support of the French Embassy in Chile, the Chilean-French Institute, the CNRS cooperation department in South America (located in Rio de Janeiro), the UC Vice-Presidence for Research Office and the Senate Extension Center.

The activities began with the visit of a CNRS delegation to the Faculty of Biological Sciences. In a meeting in the deanery, the scope of joint investigations in some challenges of our country were discussed. They also toured the Algae Laboratory in the Department of Ecology, in the company of Professor Faugeron.

The 9th and 10th of May, were dedicated to round tables on topics of special relevance to the South American network of CNRS laboratories: scientific dissemination, data science, climate science and its impacts on biodiversity, the relationship between public science and private science. These tables were held in the UC Extension Center, as well as in Universidad de Chile Central House, and had the participation of organizers Sylvain Faugeron, Alejandro Maas and guests Francois De Vleeschouwer, Olivier Fudym and Denisse Sciamarella, among others.

Alejandro Maass, director of the Center for Mathematical Modeling and one of the organizers, asserts that in Chile “there is a potential for development in the scientific community with France, which today we can all celebrate together as a result of all these more than 30 years of collaboration.” As Sylvain Faugeron concluded, “the idea was to celebrate this anniversary with the Franco-South American laboratories through interdisciplinary research. We also seek to promote new collaborations around large cross-cutting projects, taking advantage of the CNRS network base in the region ”.

The 80 years of the CNRS in South America, culminated at the Universidad de Chile Central House with a meeting of the CNRS directors in South America laboratories, to arrange the future of the network’s cooperation actions, particularly in the context of the preparation of the COP25 organized by Chile for the month of December.

You can listen to the round tables on the CMM YouTube channel.(https://www.youtube.com/channel/UCBcA_RblCFJ21xKCqmujNFA)