Numerous UC professors and researchers were present in Spain at some of the seven specialized national work tables of the international climate summit, better known as COP25. In addition, several of them were part of the report entitled “Reports from scientific tables. Summary for decision makers”, which was officially submitted during the third day of the event.

An academic delegation from the UC arrived in Spain to participate in the COP25 Madrid-Chile Climate Summit, despite the change of country due to the social outbreak that occurred in our nation. UC has had an active participation early in preparations of the event, with professors who have been part of the scientific tables, and researchers, students and professionals developing a series of previous activities related to global change. 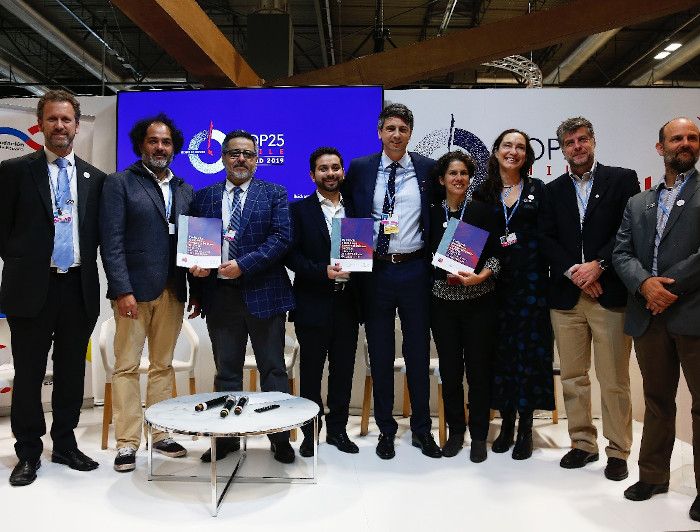 Professor Francisco Meza, from the Faculty of Agronomy and Forest Engineering, explains that there have been several contributions from UC academics to COP 25. “We must underline the role that various UC academics have had on the scientific committee, such as professors Vicuña, Marquet and Muñoz. The work that has been done in the preparation of the report entitled “Reports from scientific tables. Summary for decision makers”, which was officially submitted during the third day of the event, has also been very relevant,” he indicates.

“In my case I have had to lead, along with the academic from the Universidad de Chile, René Garreaud, the development of a very important project. It consolidates the first Atlas of Vulnerability to Climate Change for Chile. This Atlas was presented at the COP and has contributions from several UC academics in Health, Agriculture, Energy, Biodiversity and Water Resources. Some of them are Camila Cabrera, Luis Cifuentes, Cristian Henríquez, Jorge Gironás, Sebastián Vicuña, Andrés Pica, Patricio Pliscoff, Pablo Marquet, Enzo Sauma, Alvaro Lorca and Francisco Suarez ”, Meza details.

As Professor Meza points out, one of the great contributions was the submission of “Reports from scientific tables. Summary for decision makers”. It is the work of more than 50 researchers from different Chilean universities, summoned by the Ministry of Science, Technology, Knowledge and Innovation. The report from the scientific community includes evidence and recommendations from seven roundtables – several of them led by UC academics – where key issues to face climate change were addressed: Antarctica, oceans, water, biodiversity, cities, adaptation and mitigation, and energy.

“The city as an object of analysis for the effects of climate change is very relevant and complex. We had to analyze problems of mobility, energy efficiency, circular economy, natural disasters, green infrastructure, health and vulnerability. It is clear that we must reduce the footprint associated with the consumption of water, energy, materials and food, which produce GHG (greenhouse gas), within its urban limits and in other territories”, explains Juan Carlos Muñoz, who led the panel of Cities. He adds: “The main recommendation is to structure a new urban governance, which should promote urban sustainability and reduce the current significant inequalities.”

“We are presenting our interdisciplinary research on the state of the coastal zone conservation, especially the Observatorio de la Costa proposal -a technical-scientific platform oriented to the transit and linking of scientific information to civil society in general. We are working along with researchers from Cigiden and the Algarrobo Environmental Committee, with whom we have been creating an alliance to relate science with citizens. Our main objective is to reveal the delicate state of coastal zone conservation, to generate impact on public policies, especially through a coastal law ”, says UC Geography professor, Carolina Martínez.

The relevance of science and youth

The climate summit allowed, among many other topics, the coordination of scientists and young people to form new alliances or groupings. The level of discussion achieved in science has been highlighted by Rodrigo Cienfuegos, director of CIGIDEN and professor of Engineering: “As scientists and technicians we have a duty to democratize knowledge because it is a way to better distribute power. But we have to accept that we do not have models for everything: it is informed democratic deliberation that should point the way, ”he says.

The young people were also in debate and action. This is the case of Juan José Marín, Denise Salinas and Ignacio Cabrera, members of the CVerde student group, now converted into a corporation. They were part of the organization of the COY15 (Conference of the Youth) that took place a few days before the COP, where the UN Secretary General attended for the first time. In addition, Marín is a young negotiator, there are only two this year and it is the first time that it has been implemented, participating in the relevant conversations for the countries to reach agreements.

“It must be clarified that it is not enough for the countries of the Latin American region, in general, to comply with the minimum standards established in the Paris agreement. That is because the contributions of Latin American countries to the concentration of CO2 are low and, therefore, that we stop emitting is not going to make a big difference ”, Denise points out. That is why she emphasizes that young people must unite and move demanding changes from decision makers.

The youth delegation has been supported by the Faculty of Education professor, Luis Flores, who has promoted the initiative. “Global Compact of Young People for the Climate” in Chile, where students from different parts of the country participate, such as Petorca, Easter Island and Chiloé, among other areas. They were also joined by the Biological Sciences professors Pablo Marquet and Aurora Gaxiola -director of the Project “International Laboratory of Global Change LINCGlobal”-, who supported the young people reflection process, along with launching a special issue of the journal Science Advances on climate change.

More images at this link