More than 700 people in the auditorium of the Andrónico Luksic Complex and 250 followers via streaming, wiatched the talk the UC Faculty of Mathematics organized, on the occasion of the visit of the outstanding mathematician, Terence Tao. 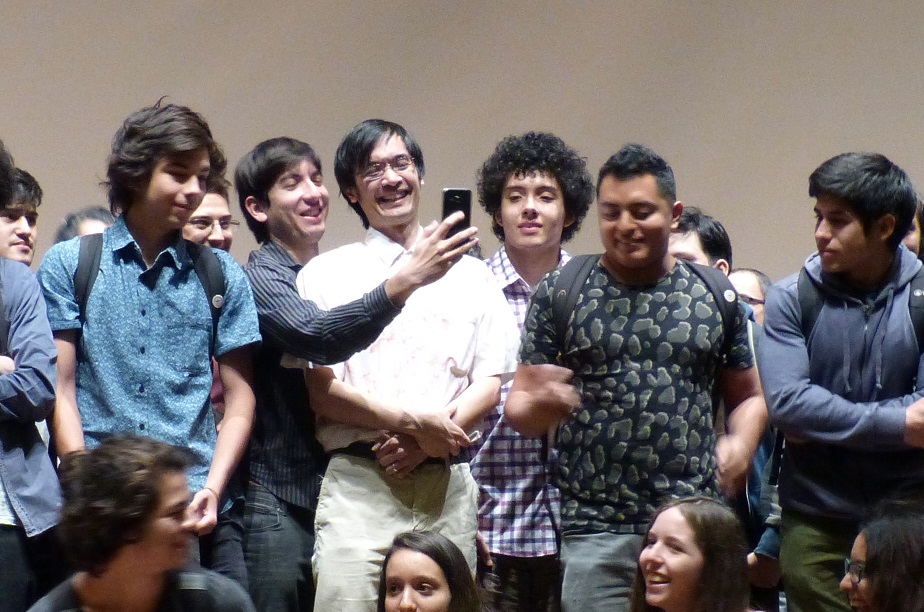 On January 18, the world-renowned mathematician, Terence Tao, gave a special talk at UC as part of his first visit to Latin America. The conference, organized by the Faculty of Mathematics, exceeded one thousand spectators.

Receiving the visit of a world-class intellectual personality like Terence Tao has been a source of pride for the Faculty of Mathematics; “Having world-class mathematicians is not new for our faculty; but, this time, we received in exceptional conditions who is probably one of the best mathematicians alive in the world. Not only was a formal visit made to UC President, academics or students, but we were able to make the visit an opportunity for the entire community with an interest in mathematics”, said the Dean of the Faculty of Mathematics, Mario Ponce.

Terence Tao’s visit to the country was managed by the UC Faculty of Mathematics, within the framework of the Future Congress 2018. “The organization of the Congress went to Universidad Católica to obtain advice on the choice of world-renowned exhibitors. We came up with Tao because he is a media mathematician and one of the most brilliant contemporary minds. He agreed to come to Chile and to the Faculty of Mathematics,” explains Alejandro Jara, Research Director of our faculty.

Terence Tao is a scientific personality who generates great expectation, reflected in the massive response to the open call. The national and international interest was such that the Faculty of Mathematics had to change the event to a larger capacity room and transmit the event online, with the support of the National University Network, REUNA. His talk, held in the Andrónico Luksic auditorium, had more than 700 people and was followed, from start to finish, by more than 200 people via streaming.

“We are very happy with the massive response. Actually, a magical moment was generated from the point of view of the Chilean intelligentsia. The community took advantage of this opportunity, which we were able to extend by taking advantage of the Congress of the Future generosity, whose organization facilitated the time for Professor Tao to be in our Faculty ”, said Dean Mario Ponce.

In response to national and international interest, the UC Faculty of Mathematics has made available the online registration of the activity through its YouTube channel and the Reuna video center, which cooperated with the transmission of the event.

The more than 700 people gathered in the Andrónico Luksic auditorium and those who were connected to the online transmission, waited in total expectation during the more than 30 minutes before the appointment was called. At the beginning of the conference, full attention and great interest in the public was appreciated, which was reflected in the many raised hands of those who waited to interact with the mathematician during the round of questions.

The effervescence of Terence Tao’s visit became more evident at the end of the talk, when the attendees filed into the corridors, to approach and take a picture with him. The youngest, especially, had the opportunity to be with Terence Tao, who, in an entertaining way, accessed the “selfies” and shared with his fans. At the end of the activity, the attendees gave positive impressions.

Hugo Maturana, a doctoral student in Mathematical Modeling at the Universidad de Chile, appreciated the initiative and the opportunity: “many of the attendees wanted to go to the Future Congress to see Terence Tao, but tickets were sold out from day one.” For his part, UC engineering student, Gabriel Garin said “It was a very interesting and understandable talk for someone with a mathematical basis. It was an excellent initiative ”.

The engineering student in Mathematics at Universdad de Chile, Edgado Matis, indicated that “although I do not work on topics related to that area in mathematics, it seemed to me a very interesting talk and, had it not been for this opportunity, I would not have been able to see Terence Tao ”.

A visit as a professional, not as a figure

“We tried to make this a visit to Chilean Mathematics. I believe that the Chilean mathematicians understood it that way, ”explained Dean Mario Ponce. During the afternoon, the Australian scientist asked for an office at the Faculty of Mathematics, where he worked the rest of the day.

“Professor Tao paid a visit as a professional mathematician, not as a character. He worked, some of our academics who presented him with problems that interested him, worked on the blackboard. Although the faculty is immersed in the world of research and one meets great researchers in the coffee room or in front of the blackboard, it is not every day that one meets Terence Tao. It was very interesting and enriching for our community ”, explained the Dean.