Why are women underrepresented in the world of science? Are female referents in Data Science as visualized as male ones? To discuss this problem and publicize the role of researchers in the area, the Midas Nucleus and UC conducted a satellite activity to the international conference Women in Data Science (WIDS). 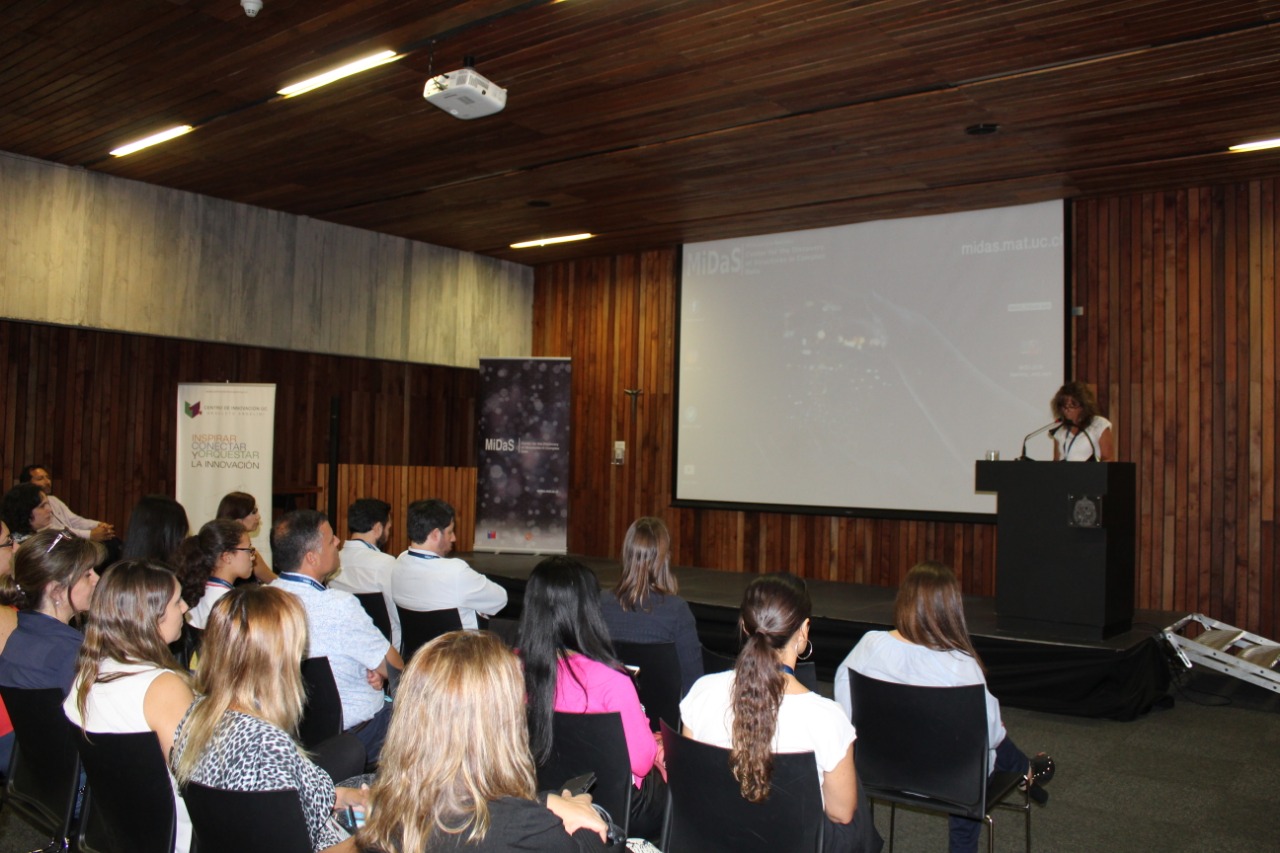 The important global conference of Stanford University, WIDS 2019, had a satellite version in Chile, which featured talks by prominent governmental national speakers, business and academic fields, as well as talks transmission from the parent conference.

The activity took place on March 4th at the Innovation Center inside San Joaquín Campus of the Pontificia Universidad Católica de Chile, and had a high attendance of students, researchers and people interested in the area.

Like the global conference, the activity organized by the Midas Core, hosted at the UC School of Mathematics, aimed to inspire and educate the world’s data scientists, regardless of gender, and share experiences and knowledge of outstanding women of the field.

WIDS in Chile, had the transmission via streaming of the international conference and local talks with prominent women in the area of ​​data science.

Maria Elena Boisier, UC  Director of Research Affairs, opened the meeting, mentioning that “the old models, equations and algorithms are no longer enough. It is necessary to go to systems, methods, processes typical of other disciplines and therein lies the challenge of data science; but this is not the only challenge: it is also incorporating women in this area and women in science, in general. WIDS is precisely an initiative that seeks, among other objectives, to support women in this field ”.

The Faculty of Mathematics Dean, Mario Ponce referred to the role of his academic unit, which collaborates with the formation of mathematical, scientific, and statistical thinking of all students of the Catholic University.

“We train new statisticians and mathematicians and we collaborate to transfer all this knowledge that is so relevant: the power of data science and statistics, to the community. Initiatives like this one are one more of these actions. In relation to data science, it is a subject in which we are active: we have wanted to raise as a faculty and through this Nucleus – which we are proud to host – the expertise: to do data science with people who are specialized in it “, he pointed.

As in previous versions, WiDS 2019 had ambassadors in different countries, being the Midas researcher and UC academic, María José García Zattera, one of the representatives in Chile.

As an ambassador, the statistician led a round table on “the role of data science in Chile”, in which participated: Midas researcher and UC academic, Isabelle Beaudry; the graduate student in statistics, María Angélica Domínguez; data scientist Karina Milanca; and Viviana Rosales, head of the economic microdata group at the Central Bank of Chile. The panelists shared their experiences as a data scientist in their workplaces and discussed what data science is like in the country.

“We want to contribute to the visibility of references that arouse admiration and that inspire all those who feel passion for the generation of scientific knowledge. The possibility of participating in initiatives such as “Women in Data Science” allows promoting the dissemination of women’s findings and achievements to the scientific world, a healthy formula to dispel the imprint of gender stereotypes and prejudices. Data science is a leading tool in the search for answers to global challenges, so we will need everyone’s input to solve them. If we perpetuate the absence of women in the world of science, we renounce their knowledge, talent and contributions, without which it will be impossible to meet the challenges of the world scientific community ”, indicated the researcher and ambassador of WIDS 2019, María José García .

The global conference was broadcast in more than 150 places in the world, and featured prominent speakers from the area of ​​data science, who addressed topics ranging from ethics and data privacy, to cybersecurity and data visualization. In addition to the conference, a datathon and podcast of testimonials from leading scientists were held.