That was the question the correspondent for National Public Radio sought to answer, in a discussion organized by the Research Affair Office and the Faculty of Communications, along with prominent national guests. 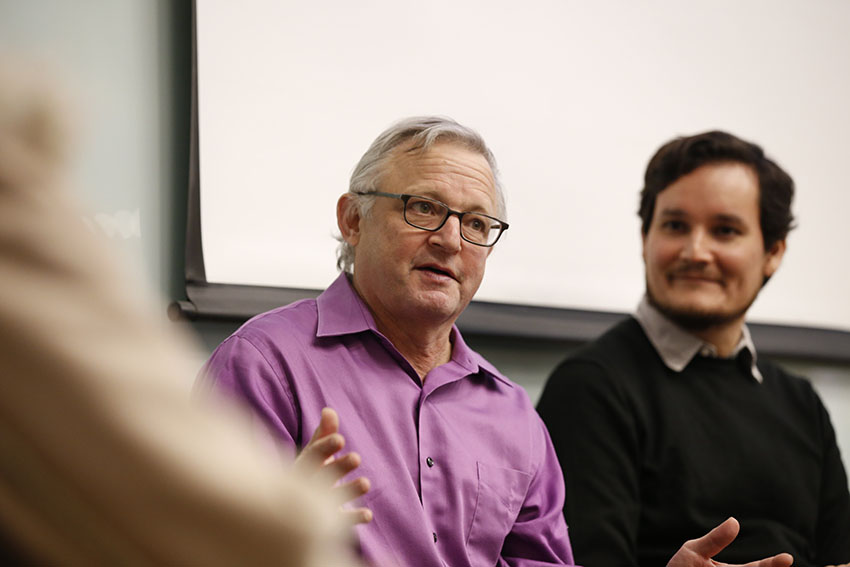 “My job is not to tell people that science is good, it is to communicate about science.” That was the statement by the American journalist specialized in science Joe Palca, a correspondent for National Public Radio (NPR) for more than 25 years ago, in an activity held in the Cowork SCL room of the Faculty of Communications, on July 8.

He was joined by Nicolás Luco, a science and technology journalist with a long career; Nélida Pohl, communicator of science specialized in biological and physical sciences, and president of the Chilean Association of Scientific Journalists; and Daniel Hurtado, academic at the UC School of Engineering and researcher at the UC Institute of Biological and Medical Engineering. The discussion was moderated by the academic from the UC Claudia Montero School of Communications, and included the initial presentations of the Vice-Rector for Research Pedro Bouchon and the Dean of the School of Communications Eduardo Arriagada.

The importance of science being available to all audiences was one of the topics addressed. “There is no such thing as the general public, science communication must recognize the existence of multiple audiences,” said Nelida Pohl, who also emphasized the importance of learning to communicate: “Not all are natural communicators, we can train ourselves,” she explained.

For his part, Daniel Hurtado said that it is essential that scientists and journalists dialogue. He also pointed out the relevance of the public to whom the information is directed: “We should speak to everyone, not only to scientists and to those who are interested in science. We should speak in a language that allows us to be on the front page, not just in a secondary section ”.

Joe Palca shared insights with his fellow panelists, and clearly defined the purpose of his work. Like the other speakers, he emphasized the importance of knowing how to communicate these issues: “Scientists must stop being scientists when they communicate.” In addition, Palca and the other exhibitors highlighted the importance of connecting with the topic that is going to be transmitted. “Scientists are passionate and love what they do, it is important to find the emotional connection with what is going to be said”, emphasized Nelida Pohl. To which Daniel Hurtado added: “Scientists are also people, you have to start communicating that.”

Who is Joe Palca?

The career of this journalist began in 1982 on the American network CBS, in Washington DC. Four years later, he left television to enter the written press, as editor and correspondent for the journal Nature. In 1992 he joined NPR. He has received important awards, including the National Academies Communication Award, the Science-in-Society Award from the National Association of Science Writers, and the Journalism Prize from the American Association for the Advancement of Science.