In the context of signing a new agreement for the ATLAS project for the Large Hadron Collider (LHC) with Chile, we were visited by Karl Jakobs, professor of particle physics at the University of Freiburg, Germany and main spokesperson for ATLAS worldwide. 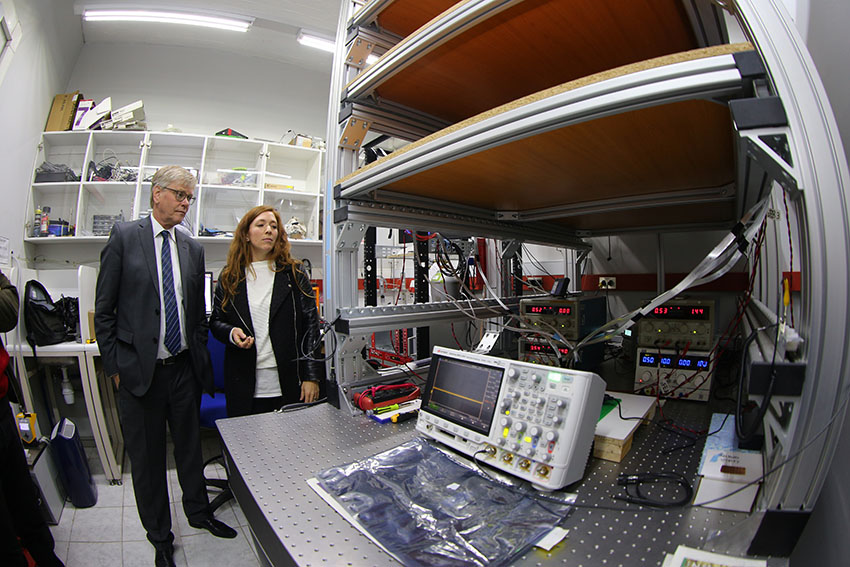 A team made up of physicists and engineers from the Pontificia Universidad Católica de Chile in conjunction with the Universidad Técnica Federico Santa María (UTFSM), is manufacturing detectors for ATLAS -one of the four major projects of the Large Hadron Collider- that will be used to measure new particles in a more exact way.

For this reason, Jakobs met on July 4th at the Faculty of Physics with Marco Aurelio Díaz, a physics academic at the Universidad Católica and UC leader of ATLAS; Ángel Abusleme, associate professor of UC Engineering and ATLAS researcher; along with other University authorities, among them the Director of Research Affairs Office, María Elena Boisier and Jerónimo Maze, Director of Research and Postgraduate Studies at the UC Institute of Physics.

At the meeting, the participation of our country in the ATLAS project was reviewed, where Chile has been a member since 2007 and collaborates with 15 physicists, 9 engineers and a doctoral student, many of them from UC. In addition, the points to be presented to CONICYT were discussed, where they seek to sign a new agreement with Chile for new updates to the large collider, the Phase II of ATLAS.

The member of the European Organization for Nuclear Research – commonly known by the acronym CERN – took advantage of his stay at the San Joaquín campus to visit electrical, mechanical engineering and other physics laboratories.

“Both for Chile and for the University, it is very important to be able to participate in the ATLAS project, which is at the forefront of world scientific development,” commented the Director of Research Affairs Office, María Elena Boisier. “Karl Jakobs’ visit proves this and I think that the good impression he got from our laboratories and from the work and research produced within the University places us as an important collaborator in this great project.”

Located on the Franco-Swiss border near Geneva, the Large Hadron Collider – a 27-kilometer-circumferential ring located 100 meters underground – is the world’s largest particle accelerator.

Inaugurated in 2008, the LHC is one of the most complex machines built to date: physicists from the European Laboratory for Particle Physics (CERN) make subatomic particles (mainly protons, one of the constituents of the nucleus of the atom) collide with each other in selected points where large detectors (ATLAS, CMS, LHCb and ALICE) are located. These record the particles resulting from collisions to study the elements that make up the matter that the Universe is made of, including ourselves, and their interactions.

Its 9,300 superconducting magnets, essential for turning particle beams at speeds close to those of light, must be cooled to a temperature lower than that of outer space (-270 degrees Celsius, close to absolute zero); the interior of the ring is the emptiest place in the Solar System (10-13 atmospheres) to prevent the particles from colliding with gas molecules; and when the particles collide with each other, the temperatures generated are 100,000 times hotter than the interior of the sun.

The LHC will remain operational for at least 15 years. In that time, scientists hope to obtain sufficient data to deepen their understanding of the origin and formation of the Universe. A great step in this direction has been the discovery of the Higgs boson, the particle associated with a new force field in Nature (called the “Higgs field”) that would explain the origin of the mass of elementary particles.

The visit in images (https://flic.kr/s/aHsmFdd4PG)